CONNOR SURFS THE WAKE TO WIN 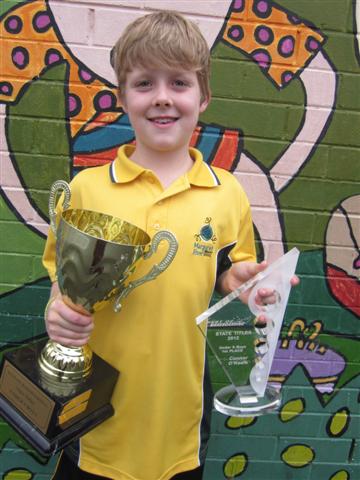 Connor is a passionate wakeboarder who spends as much time as possible with his family, surfing the wake behind the boat.  The State Wakeboarding Event took place in Mandurah at Bonney’s Water Ski Park.  On the day of the event, the conditions were flat which is really good and Connor came through the qualifying heat successfully to enter the finals, which he won!

I asked Connor for some comments on his sport and this is what he said:

It’s a really good sport.  It makes you fit and you learn good balance.

Congratulations to our state finalist and Under Nine Boys’ Champion!  Well done, Connor!

Editor’s note:  My apologies for an error in referring to Connor as ‘Mitchell’ (his brother).  A very well-deserved award, Connor!