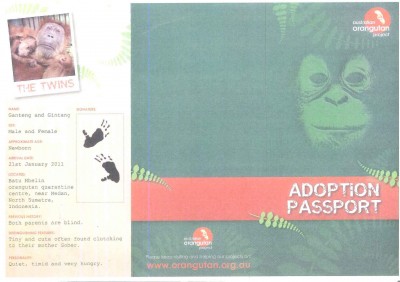 Margaret River Primary School is among a select group of schools to win funding to promote Asian languages and culture within their classrooms and school communities.

As part of our project objectives to develop innovative and high quality teaching programs that extend beyond the boundaries of the school and to ensure links between studies of Asia and other school priorities such as our Environmental Programs, we have adopted twin baby Orangutans through the Australian Orangutan Project.

The United Nations has advised that the orangutans are predicted to be the first Great Ape to go extinct in the wild if urgent action is not taken. Our adoption assists in the AOP mission to save these magnificent creatures. Their greatest threat is from deforestation caused primarily by the conversion of rainforest to palm oil and pulp paper plantations.

We would like to introduce our babies to the school community. On Friday the 21st of January 2011 at approximately 13.30, Sumatran orangutan female “Gober” gave birth to healthy TWIN orangutans, a boy and a girl, provisionally named “Ganteng” (handsome) and “Ginting” (a common local family name).

This birth is also particularly notable in that BOTH parents are BLIND. The mother, Gober, is an elderly female, probably well over 40 years old, who was captured by SOCP vets and Indonesian Wildlife Service (BKSDA) in November 2008. The Father, named Leuser, was originally confiscated as an illegal pet in Aceh Tenggara in February 2004.

Mother and Father and the two new twins are all housed at the Batu Mbelin Orangutan Quarantine Centre, near Medan, North Sumatra, Indonesia. This is the only such centre in the world for Sumatran Orangutans.

In the long term it is hoped that both infants will eventually be released to a life in the wild, something that has been denied both their parents due to their blindness. Thus despite their handicap, both Gober’s and Leuser’s genes will be given a second chance to contribute to the conservation of their species in the wilds of Sumatra.

Please keep visiting and helping our projects on: ORANGUTAN WEBSITE

Click on this picture to read updates on the twins progress. 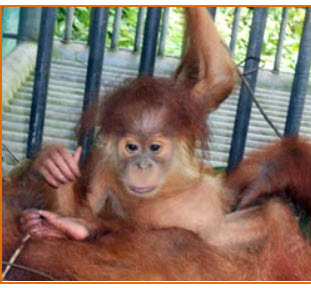