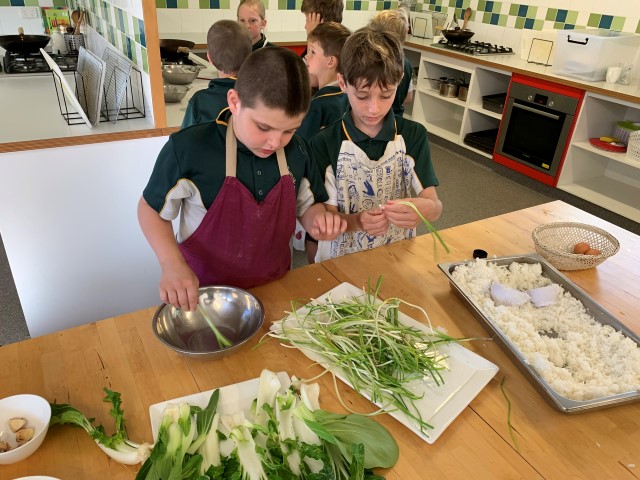 I enjoyed making the choc chip muffins because it was fun and they tasted delicious. (Jessica)
My favourite part of kitchen garden was when we made pasta because it was really amazing. (Sienna)
I really liked kitchen when we made the winter warming crumble. It felt warm in my tummy! (Eva)

Garden was hot and I was tired but I still enjoyed it although the soil smelled very bad. We were moving the garden soil from Mr Mac’s trailer into the garden  bed 21…..(Ophelia)
I got dirty but my group did a great job cleaning the chicken coop. We also got to hold the chickens which was fun…..(Khloe)

I liked our first ever lesson in the garden when we moved the compost from Bay 2 to Bay 1. I got really dirty and my shoes were full of dirt too. It was so much fun!….(Charli)
Garden is really fun. I really like harvesting the fresh produce and doing the worm farms. Kitchen Garden is a really great program and it is awesome…..(Jesse) 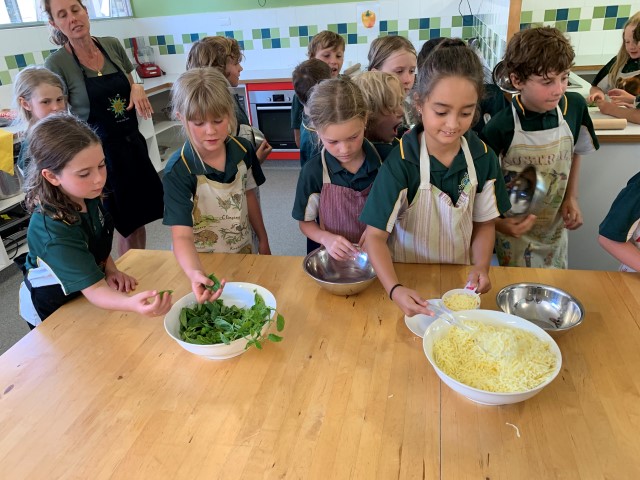 On Friday of Week 8 Term 2, we made Winter Warming Crumble. Ophelia was head chef. Sarah explained what to do and then we set off.
First, I got the butter and the ingredients. We preheated the oven to 180 degrees celsius.
Then we chopped apples and rhubarb into small pieces and put them in a large bowl. Next we added brown sugar, orange juice and orange rind and poured that into the same large bowl as the apples and rhubarb. We carefully mixed it together with a large wooden spoon.
Then we made the crumble topping. We placed the butter in a small saucepan over low heat and we stirred it until it melted. Next we combined the oats, sunflower seeds, cinnamon, flour and maple syrup into a medium bowl and added the melted butter. Then we mixed it together.
Finally we placed the apple and rhubarb mixture on a baking tray and covered it with the crumble topping. Then into the oven it went.
It was really tasty and we enjoyed the winter warming crumble.

Thinking Hats Evaluation:
RED HAT……It was a lot of fun making it but next time I think I will just make the crumble.
Black HAT….Alby cut himself slightly.
YELLOW HAT….My group made it really fast and we improved our knife skills and Alby learned to take special care when cutting. 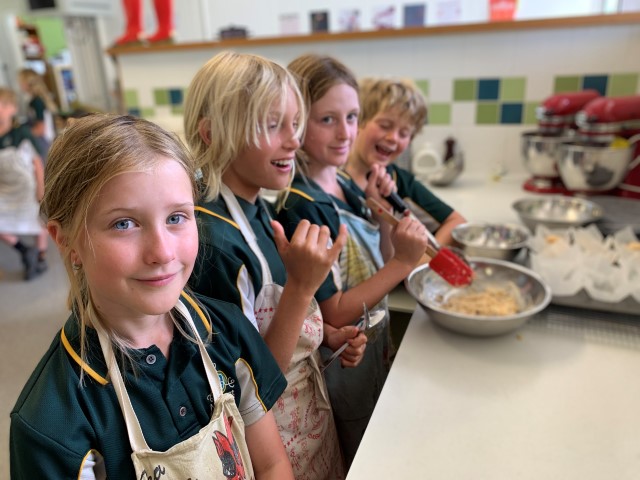 In kitchen we made Fried Lettuce Cups. Cassidy was head chef. It was fun! We had to cut vegetables, make an omelette, cook the rice and more. I liked the fried rice. It was good but I didn’t like the peas in it. Also, the lettuce was a bit spicy for me.
I decided to present an acrostic for my report. 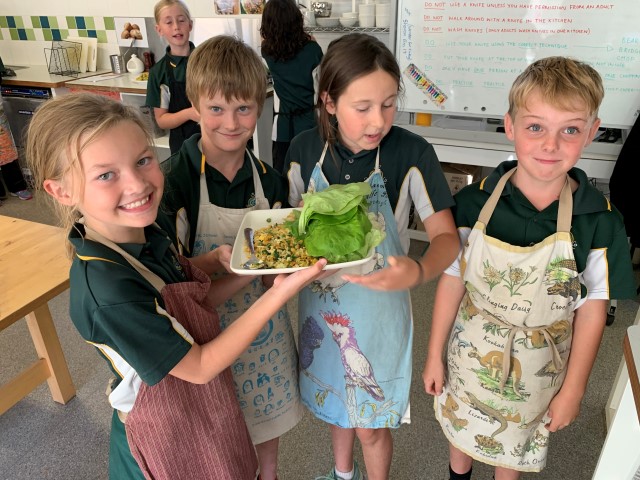 Fried rice with lettuce cups is what we made

Rice was collected by Savannah

I gathered the vegetables

Eggs were collected by Cassidy

Dishes needed to be washed. Savannah and I did that!

Rice was cooked with the vegetables and sauces in the wok.

Cassidy was our head chef today

Everyone in our group liked the omelette, except Cassidy. 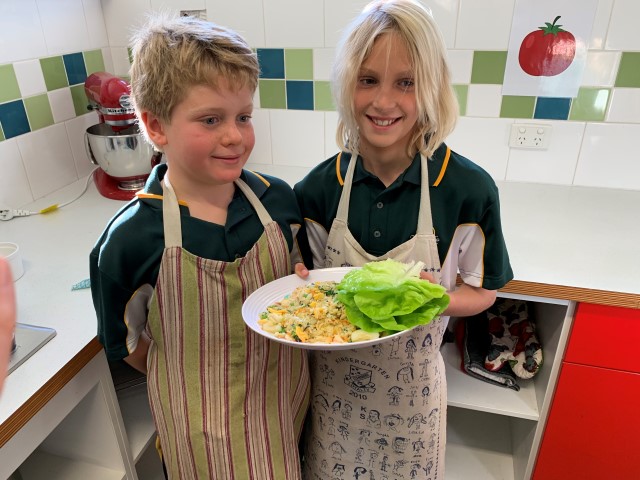 KITCHEN REPORT by Sebastien U.

Last Friday we had our second kitchen lesson. We missed Week 4 because of a pupil-free day. Sarah taught us some important knife skills. She showed us the bear claw and the bridge hold when using a knife to cut or slice. She also showed us how to chop safely.
The important things to remember were to focus, take care and protect the thumb and fingers.
Later we had a chance to practise our skills when we cut up the salad and sliced some bread.
We made a seasonal garden salad and this required us to use knives correctly and safely. I reckon I did grand job.
For this recipe we used lots lettuce, parsley and cucumber. For the dressing we combined garlic, extra virgin olive oil, red wine vinegar a pinch of salt and pepper. We also made croutons in the oven.
I liked the salad the best. I think Sarah does a great job teaching us. 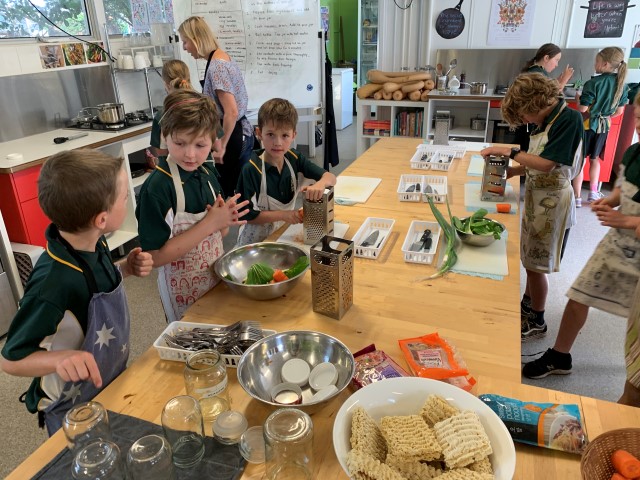 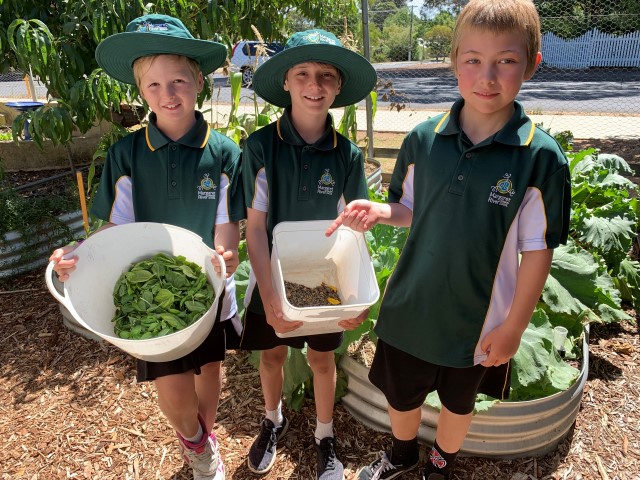 Today at garden, my group the Capsicums had to do the job that most people do not like – which is cutting up the food waste for the worm farms.
It was kind of fun but a bit stinky! We have to cut up any whole apples and the bigger apple pieces before we put them in the worm farms.
This is because it takes weeks for the worms to eat it.
We also got to feed the fish.Garden was fun and stinky! 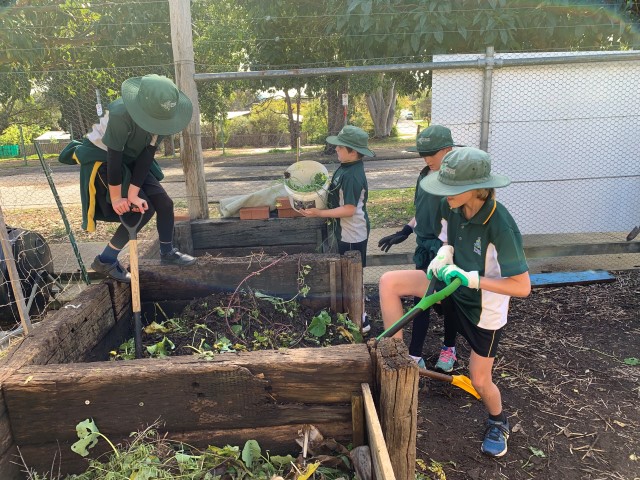 Footnote…..Geoff McLeod (KG coordinator)
Students from T5 do a wonderful job in collecting the food waste from around the school. Each class has its own food waste bin which is emptied daily. The students weigh the waste and enter the daily record on a monthly register. Waste is sorted and cut to size for the worm farms. We are recycling between 45kg and 65kg each month through our worm farms and even more through our composting program. We are now collecting food waste from our school canteen along with our program kitchen waste.
Thanks to the students from T5 for their hard work and the reliable and responsible way in which they carry out this important sustainability activity for the school. 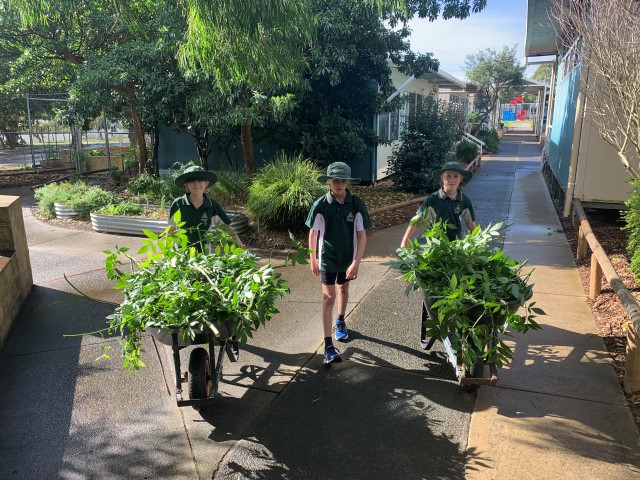 GARDEN REPORT by Jessica B.

Yesterday we had garden and my group, the Terrific Tomatoes had the hardest job. Well, one of the hardest jobs. We had to dig up the mint roots from the entry garden.
First we had to put on some gloves and get to work. We used trowels to dig under the mint. We then had to remove the soil from the roots. Next we put the root ball into the black buckets. We took the buckets to the shed where later they would be taken to the compost bins. We also had a lot of help from other groups as they finished their jobs early.
It was hard work but we got a lot done. Our group worked well and we achieved a good result. I enjoy garden lessons. 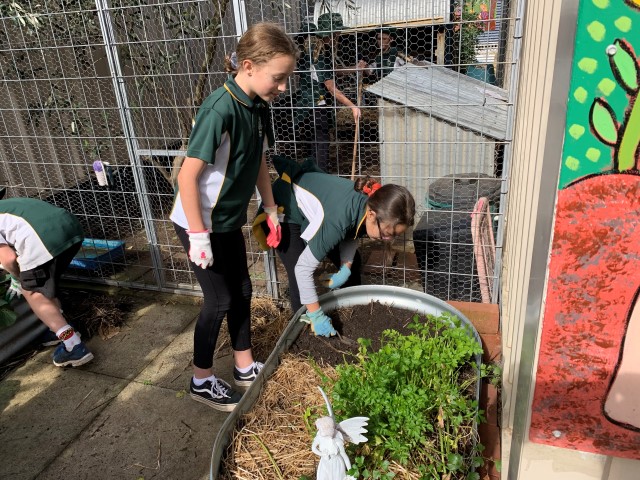 My group the Radical Radishes did the soil for the Year 5 competition. They are seeing which group can grow the biggest and best broad beans. We had to move the rich garden soil from Mr Mac’s trailer to the four half wine barrels so the Year fives could begin their challenge.
We worked really well and I think my group did a great job. 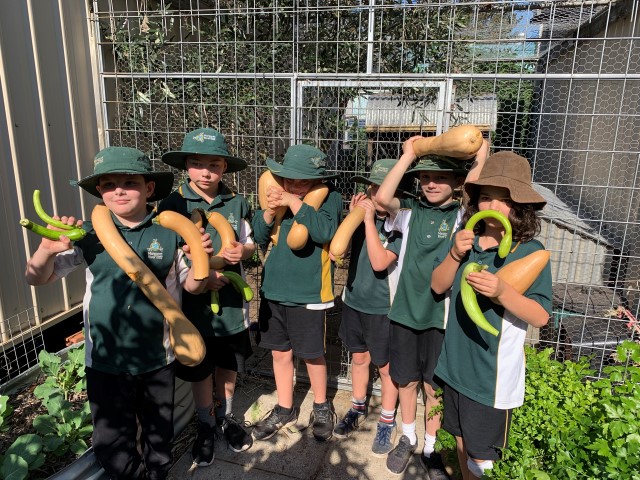 Our group, Marvellous Mushrooms, had to do the chickens. Eva and I scraped the poo with rakes because on the floor there was left over vegies, poop and other stuff like that. Seb and Dylan were scraping and cleaning out the chicken coop. It was poopy and they had to scoop the poop. Luckily I did not have to scoop the poop and I didn’t have to carry the chickens either.

Those chickens hate me….they just poop on me.
I learned that chickens cannot be tamed.
Interesting: After doing the chickens at school, I realise that I don’t need chickens at home……..because there’s too much poop!!!! 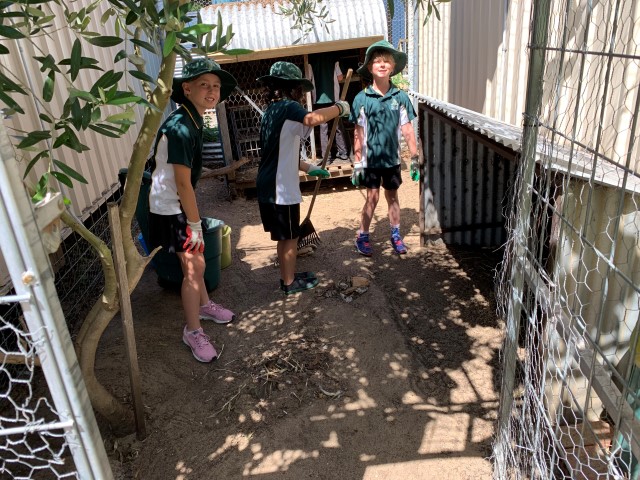 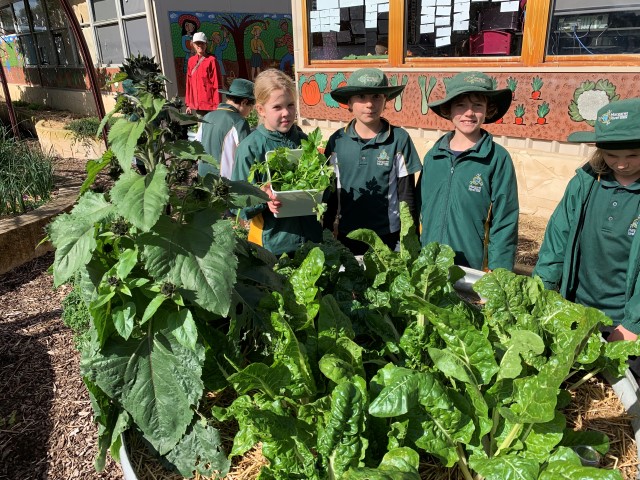 Written and photos by Geoff McLeod and students from T5; Posted by D. Veary