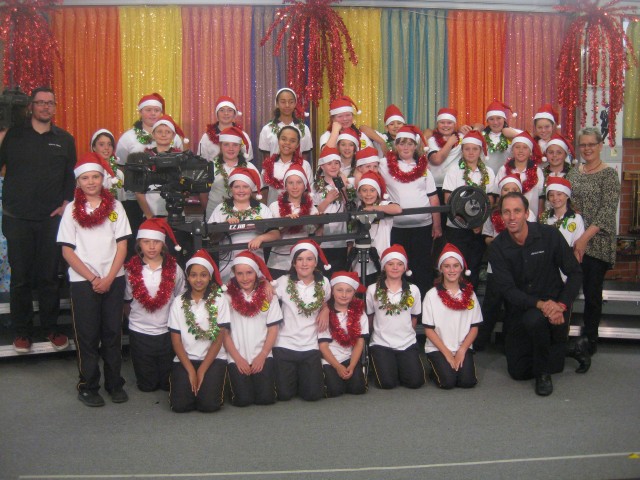 With the rapidly approaching onset of the festive season approaching, expect to see plenty of choral Christmas Carol singing on television. One of the featured choirs this year is Margaret River Primary School’s Dreamcatchers who were recently filmed at the school for inclusion for broadcasting Australia wide on the Win, Gem and Go TV networks.
Holly Kings from Lomax Media in Bunbury, who shot the choir’s performance, said broadcasts would begin from the stations from November 23rd onwards towards Christmas, but due to variations in programming scheduling, she was unable to specify exactly when The Dreamcatchers would appear. She advised all keen locals to keep watching.  [Apparently, the Dreamcatchers started screening last weekend, so be on the lookout for them.]
MRPS music teacher and choirmaster Helen Collis, said

I am absolutely thrilled with the exposure the choir were able to achieve on television and I’m very happy with the quality of the students’ filmed performance.  The Dreamcatchers are very excited by the opportunity to be on television across Australia and are also looking forward to their upcoming performance at the Margaret River Carols by Candlelight on Friday December 12th.

Written and photo by Gary Gibbon; Posted by D. Veary