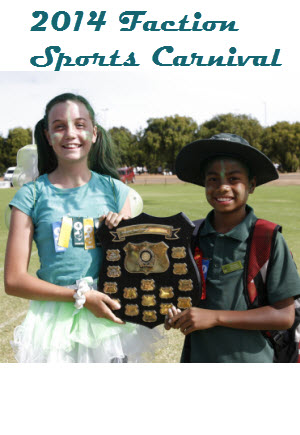 After the jumping, throwing and some distance events were held mid – week on the school grounds, Forest held a slender points lead over the Earth and results during Friday’s events saw the two factions swapping the lead several times throughout the day.

It was only during the final couple of relay events of the day, that Forest was able to find a winning way home, taking the faction shield away from Earth by only nine points.

The carnival was notable in that it was the last time the school’s Year Seven students will be competing and they made the most of their final opportunities, by taking 7 of the possible 8 major individual results in the twelve year old and thirteen year old divisions.

Deputy School principal Campbell Madden said it was a very well organised and enjoyable day for all and paid tribute to athletes, teachers and P & C helpers and parents who assisted in all manner of ways to make the carnival a success.

Results after this i-movie thanks to the photos of Louise Mann. We love your amazing action photography, Louise and your support of our school events! Thanks. 🙂