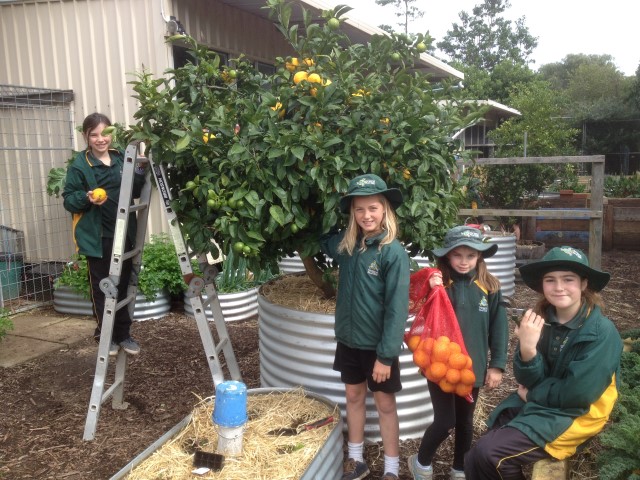 What a busy time Term 3 is in our Kitchen Garden Program. The students are very active in the garden carrying out the many tasks that Terri has organised for them. There is much to do even in winter and even the rain doesn’t reduce the enthusiasm for the tasks. In the kitchen, the students are continuing to produce tasty food from the recipes created by Sarah. The enthusiasm is high and the students are learning valuable lessons that will no doubt be useful in home kitchens right now!

As always, we appreciate the help we receive from our class volunteers. Please contact your child’s teacher or the kitchen garden staff when you can spare some time to assist your child’s class during kitchen and/or garden this term. Alternatively, drop in to the kitchen or garden prior to the lesson.

Today in Kitchen we made flatbread and hummus. When Sarah started talking about what we were doing today I thought, “Yes! We are making flatbread.” 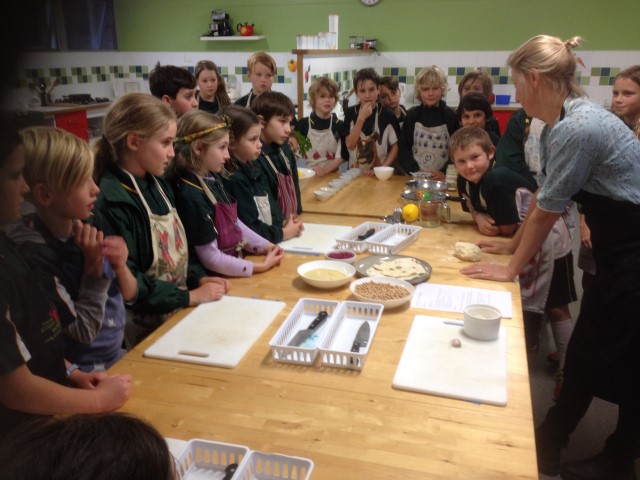 After Sarah had finished speaking we chose our head chef, Isaac. Isaac said that I could do the flatbread with Jimi. First,  Jimi and I started getting the materials and ingredients ready to start the flatbread. We combined the ingredients and made the dough. 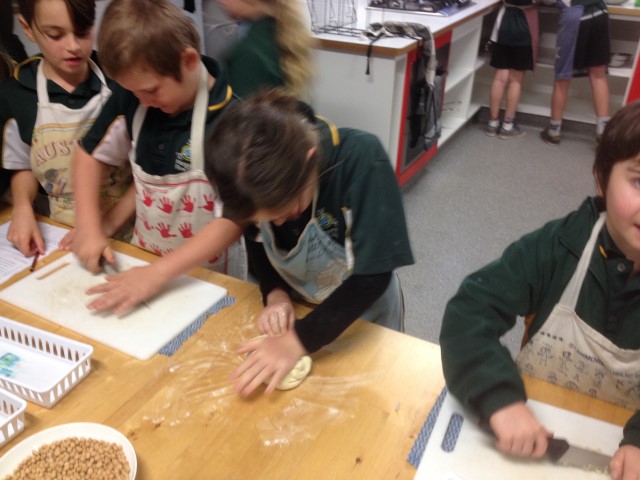 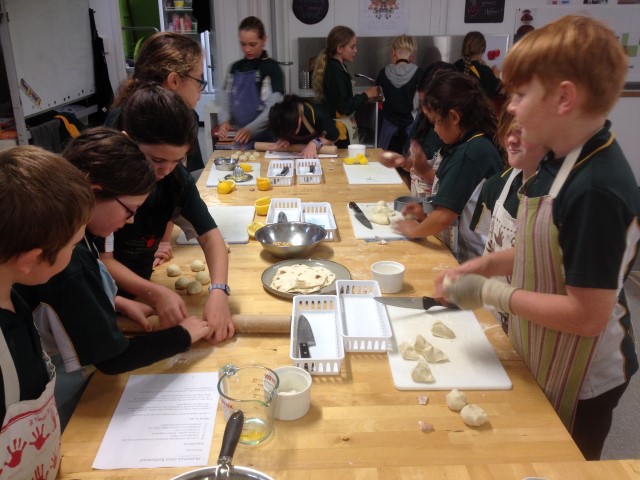 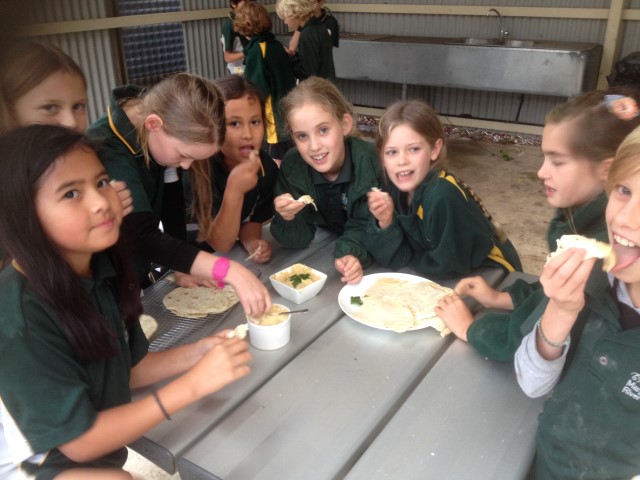 Kitchen was awesome! I really enjoyed learning how to make flatbread!

Today we had Garden. When we arrived we sat down and listened to Terri tell us what the jobs for the day were. My group, the Tomatoes, were doing photos with Terri.  Terri took photos of some of the recycling jobs that we do in the garden. 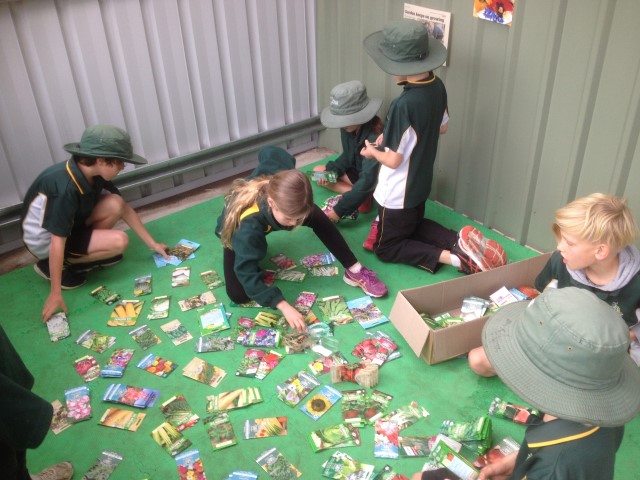 We each held things that we recycle in the garden. I held seeds and toilet rolls. Poppy held a cardboard box and a milk container.  Tilly held a plastic berry box. Billie held seeds, a jar and a plastic moth on a stick.

In Garden we also recycle food and garden waste in our worm farm and compost bins. We also collect rainwater in our two tanks which is then recycled as the garden is watered throughout the warmer months.

Written by Billie and Amelia 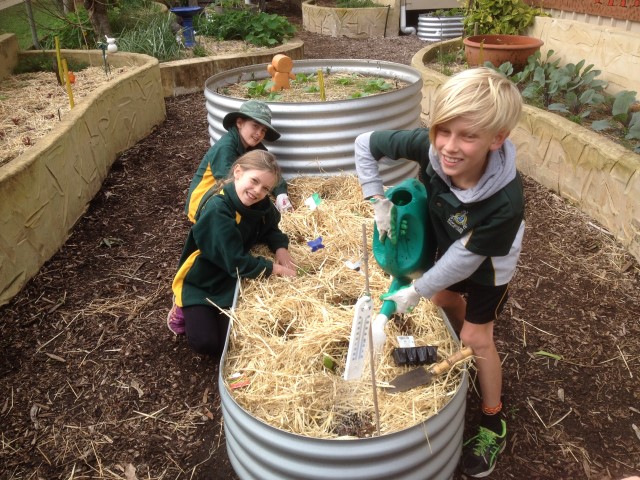 Today, Brilliant Broccoli and Amazing Apples were planting rainbow chard. It was really fun! Shiloh planted one, Maya planted four, Jade planted two and I planted three. After they  were planted we watered them in. We took turns to water three each. 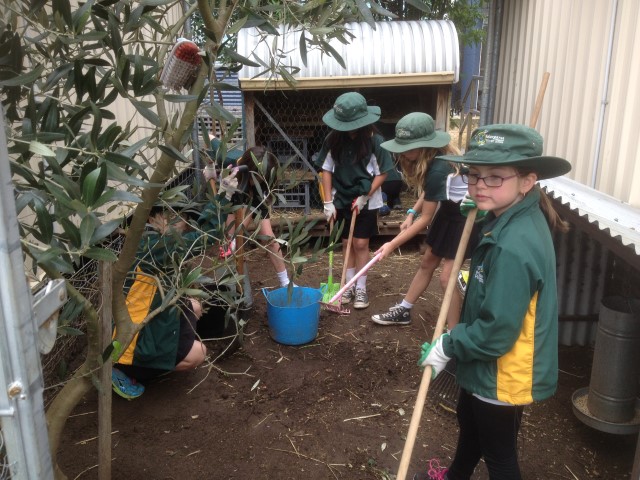 After that was done we helped Marvellous Mushrooms with the chickens by raking up the extra food waste in the pen. After that I helped Billie carry the ladder back to the shed.

Today in Garden we moved the compost from compost pile one into compost pile two. Tyler, Jimi and I found lots of mole crickets. Jimi also found a redback spider and he made a very bad decision by not  killing it!….but don’t worry, we were all wearing gloves. However for the next 20 minutes we were all very wary! 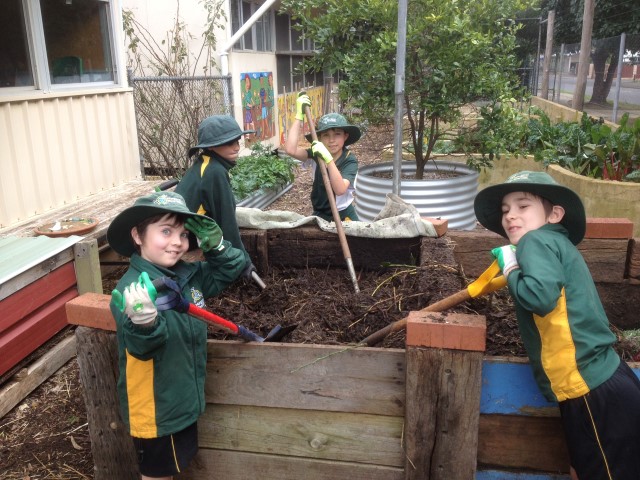 After all the digging I went and washed my very dirty shovel and put our gloves into the box. Then we lined up and sadly our lesson came to an end. Garden was terrific today and I can’t wait until next week!

Photos by T5 and Mr Mac; Posted by D. Veary