Edible Gardens Open Day by The Bossy Chooks in the Garden

Introducing our second team of Kitchen Garden Journalists, from T12  – Ella B, Holly, Harper and Rosie.  They are “The Bossy Chooks in the Garden” and they will be bringing you Garden news each fortnight, from a Year 5 student’s perspective.  Their first assignment was to report on the Edible Gardens Open Day in our Kitchen Garden. Great job, girls! – Editor 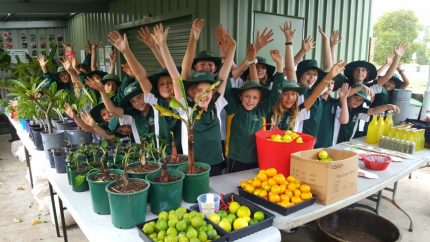 Preparation for the Day

Did you go to the Edible Gardens Open Day on Sunday 30 May? If you did, you probably would have seen the banners, all the plants with awesome labelling and all the different citrus fruits. 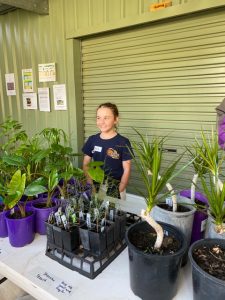 When our class was preparing for the open day, we had to hang up the banners and prepare the compost by putting compost bin three into compost bin two. We had to label all the plants, fix the fence so no-one got hurt, and finally but not least, sort the different citrus fruits.
It was so much fun on the day.  We hope you enjoy our garden adventure! 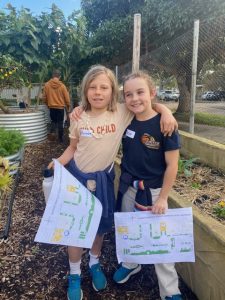 Just how many green do you think there are in a garden?
Well, I was trying to explain them all on my tour when I saw the mum’s daughter stop looking.  “Is she even listening to me?” I asked loudly.
“Yeah, she’s listening…” the mum said, like her daughter was really into the conversation. (By the way, I never listened as a child.)
At the Edible Gardens Open Day, my job was to give tours of the garden. All the tour guides had a badge and a map of the garden to help them with the tours.  I was doing this tour with my best friend, Elke. This was my second tour, and I think it was a pretty good one.

I sighed heavily.  “Not another big banana tree!” I muttered.  But seriously, they were heavy!  Mia and I wheeled them through the garden.  “Bang!”  We ran into the wall. “Those sharp corners are annoying,” I muttered.
“Okay.  Take 2!” I said confidently.  This time I bumped my head on the big not-quite-open flower bit hanging down from the banana tree.  “That’s a hard flower,” I thought in my head. 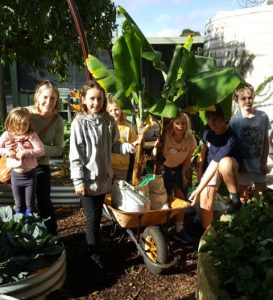 “Take 3!  We’re going to get through!” I said.  This time we managed to not bump into any banana flowers or walls.  Once we got across the road, we had to wait quite a while for our customer to drive her car around.  Next we had to carry both of the heavy banana trees and place them into the back of the car.
Gosh!  That was a big, hard day!
Written by Harper

The tour was going really well until…
“What type of chickens are these?”
“Are their eggs as big as emu eggs?”
“How long have you had them for?”
“Why does this lady ask so many questions?” I muttered in my head.  “Now let’s move on,” I said loudly.
I thought we were going to the tadpoles until I turned around and I saw my tour partner, Daisy, telling them about all the Silkie chickens’ features.  “Aww man…” I thought, “I’d better head back to the chickens.” 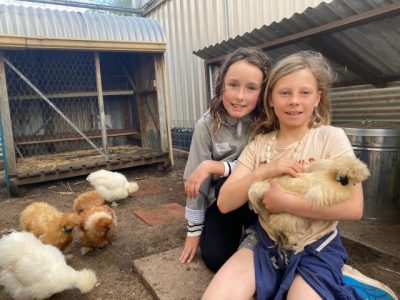 So many people wanted to see the chickens on the Open Garden day, but most of them wanted to pat them, even though unfortunately they weren’t allowed to pat them or even go into their cage. Luckily the chickens were behaving and weren’t being too loud.
As everybody wandered around the garden, they noticed the Indonesian signs next to the plants. They are there so that people who want to know the Indonesian words for the plants, can use the signs to see their Indonesian names.
My tours went really well and we got five-star reviews on all our tours, which was amazing.  The chicken tours were definitely the best.
Written by Rosie 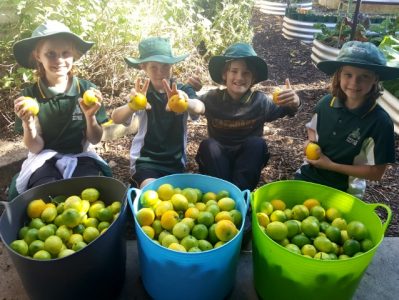 I was there for half an hour.  I was doing some citrus fruit deals for people while I was packaging the lemons.  I was doing great deals like: “Two lemons for two dollars!  Four lemons for three dollars!”  Ka- ching!
I also combined fruit in bags to give people better value.
At the Edible Gardens Open Day, I was working on the citrus fruit stall, packing and selling all kinds of citrus – like mandarins, limes and a whole box of lemons.
One little girl came up to me and said, “How much for ALL the lemons?”
I said, “I don’t know – best get counting!”
She giggled. I made her a bag of lemons, because she wanted to make lemonade with her friends, then I went on with my day.
We sold most of the lemons because they were the most popular. Lemons are very useful for lemonade, lemon cordial, squeezing onto fish and chips, and they can even keep cut-up apple fresh in the fridge. 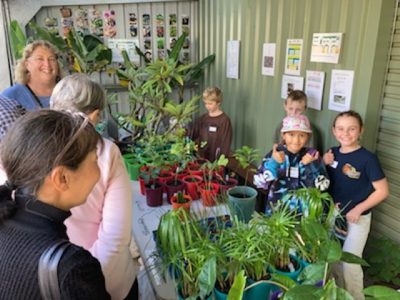 The limes and mandarins were really good and people who bought them said they were their most favourite fruit!  The limes were cool.  They were wrinkly because that’s just how this type of lime grows.

Written by Ella B.

Close your eyes and picture this…

Ella B. painted a picture of what she experienced on the day. 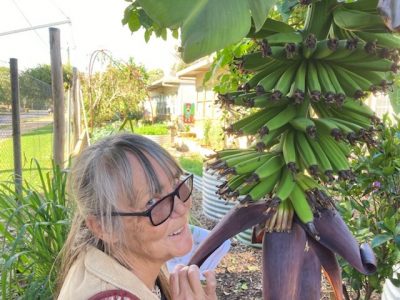 What did you see?

I saw banana trees and mini bananas. I saw elephant ear plants. They are called that because they look like elephant’s ears.
There were worm farms you could take home, along with worm juice (which we call worm wee, but that’s a bit disgusting.)
Some people at our stall were advertising for the pots by putting them on their heads and performing tricks with them for people to buy, as they were really good pots but people weren’t buying them.

It was shocking for people, in a good way, that we as kids were managing to do this and all co-operate with each other. 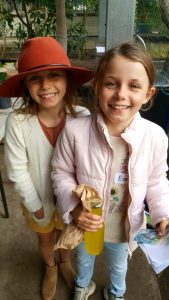 What did you hear?

I could hear birds tweeting, people chatting, people doing deals with the garden stalls.
I could see all my friends there too.  It was a good day.

What did you feel and did anything funny or special happen?

I felt pride and I was really happy because I love helping out.  It was great to be with my friends, working in the garden at my school.
One of the boys put so many pots on his head that they all fell on him, and he was covered in pots.  It was so funny, that even he laughed!
Reflections by Ella B.

We raised over $1000 for our Kitchen Garden Program from our garden sales on the day, and over $7000 was raised for the MR Environment Centre from ticket sales.

What the students learned on the day by being involved in an event like this is just amazing! It’s something we can’t teach them in any other way. It’s a very special event and Margaret River Primary School is the only school who participated this year.

I received so many complimentary comments from community members who were wowed by our kids’ knowledge, politeness, tour guiding abilities, money- handling skills, selling prowess, and enthusiasm. They are a credit to their parents and caregivers, the Kitchen Garden program, our school – and most importantly, themselves!

Ashlyn said three words to describe her experience on the day are,

She said she was selling plants to people and they bought all the banana trees.

Lexi said her three words were, 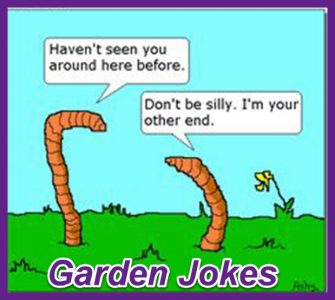 “Wow!” said Lemon to Lime, “You smell nice.  What kind of perfume do you use?”
“Citrus Cologne of course”, replied Lime.

What did the chicken say to the smarter chicken?
You’re an eggspert!
Written by T12 Garden Journalists – Ella B, Holly, Harper and Rosie; Photos by Terri Sharpe, Kelly and S. Belbin; Posted by D. Veary